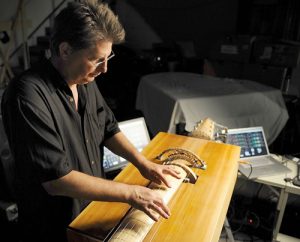 Paul Dresher is a multi-talented composer who is uniquely able to weave contemporary classical, pop, minimalist, and South and Southeast Asian musical styles together into his own distinctive personal style. He creates in a myriad of different genres, including experimental theater, contemporary opera, acoustic and electronic chamber music, orchestral compositions, dance scores, and musical instrument invention.

He is now at work on a second commission for Berkeley Symphony that will premiere this October. For the coming year, Paul will be creating a new multidisciplinary piece titled Molded by the Flow in collaboration with playwright Rinde Eckert and faculty and students at the University of Southern Maine, where Paul has been appointed USM Libra Professor for the 2016-17 academic year.