Both Eyes Open, set in Stockton, CA, focuses on a Japanese immigrant landowner named Jinzo Matsumoto, who, with his wife Catherine, was interned in a camp in Rohwer, Arkansas in 1942. Before leaving their farm, they bury a Zen Daruma Doll on their land. According to Japanese tradition, these papier-mâché idols are given to people when they embark on a challenging endeavor or make a serious promise. At that time, only one eye is painted on the doll’s face to symbolize the person’s initial commitment to the challenge. If success comes, then the doll receives its second eye and is burned ceremonially to release its spirit. 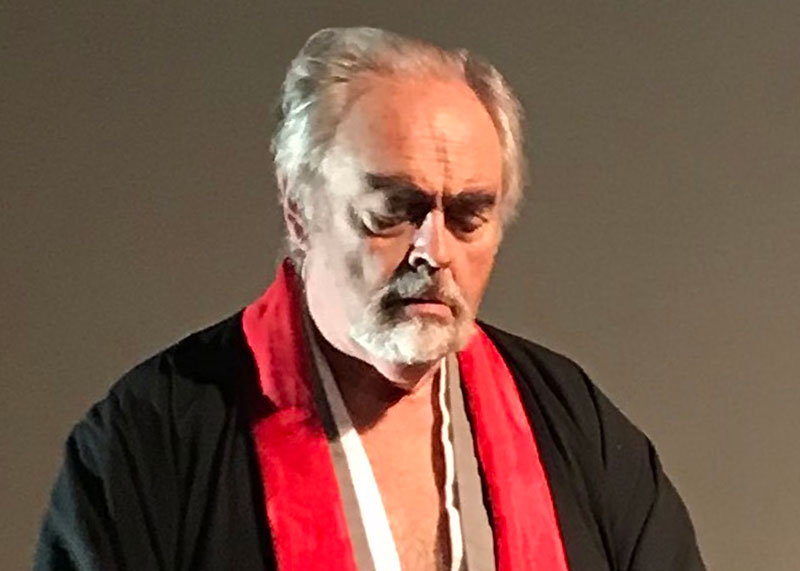 During his internment, Jinzo (baritone Kelvin Chan) not only loses his land, business, and his pride, but also his wife Catherine (soprano Kalean Ung), who dies in camp while giving birth to their first child. As Jinzo’s inner life begins unraveling, our story takes a hallucinatory, nonlinear turn when the Daruma Doll, played by tenor John Duykers, comes to life as a sardonic, one-eyed guardian angel. With irreverent song, wild dance, stark narration, and Zen Buddhist teachings, the Doll, joined by the ghost of Jinzo’s deceased wife propels the piece forward. Together, in song, dance and visual images, they depict metaphorical flashbacks and dreams of Jinzo and Catherine’s earlier life. Reaching a fever pitch, the drama splits violently into two alternative conclusions. In one, Jinzo ends his life by lying down on nearby railroad tracks and dies; in the other, he is rescued from an oncoming train by the Daruma Doll, who invites him to fulfill a promise made to Catherine: to return to his land, to the center of his soul. With this promise, the Daruma earns his missing eye and fades away in a vortex of ashes. The audience must then decide which story line is “true,” and in the process, come to empathize and understand more deeply the existential conflicts that interned Japanese Americans faced after returning home from the camps.

Joining our three singers will be two members of the Paul Dresher Ensemble Marja Mutru (piano), and Joel Davel (Buchla’s Marimba Lumina.) Director Melissa Weaver and video artist Kwame Braun and Matt Jones will use projected images, simple scenic elements, and lighting to create the performance environment. Choreographer Katie Faulkner will give physical embodiment to the Jinzo’s struggle, through stylized dance and abstract movement. Conductor Jennifer Huang will lead the ensemble. In his libretto Philip Gotanda examines institutionalized vocabulary about race and ethnic difference, exposing scapegoating, fear of betrayal, and xenophobia. His story is not a naturalistic tale of social realism but instead uses abstraction and satire to embrace divergent perspectives.