“In Search of Lost Beauty…” (2016), concept, music and video by Žibuoklė Martinaitytė, is a sequence of audiovisual novellas for violin, cello, piano, electronics and video on the elusive subject of beauty. Here the experience of time is slowed down as to transport us into an alternate dimension where the commonly apprehended reality is inverted into the otherworldly mystique of reflections and shadows. The amplitude of this ephemeral search for beauty encompasses phenomena found in nature, everyday life and art. The piece consists of 10 sections, which are woven into one structural entity of suggestive coherence.

“Beauty is the mystery of life. It is just not in the eye. It is in the mind.” –Agnes Martin

“If this music transports you into a haunting, mysterious dream world, don’t worry about it – it’s only doing its job.” –Ingram Marshall

In Search of Lost Beauty…

Virginia Woolf makes a distinction between Moments of Being and ordinary moments. In my piece “In Search of Lost Beauty…” I was capturing ordinary moments, which by means of simply putting our undistracted awareness on them, transform into Moments of Being. These moments are strung together in a sequence of time with no particular storyline, mostly as visual hints of our memories continuously coming back in multiple metamorphoses and trying to intimate a storyless narrative.

“In Search of Lost Beauty…” { Prarasto grožio beieškant… } (2016) for violin, cello, piano, electronics and video is an hour-long sequence of audiovisual novellas. The piece consists of 10 sections, which are woven into one structural entity of suggestive coherence. Some of the pieces were composed previously as separate works – Serenity Diptychs (2015) for violin, tape and photographic diptychs by Philip Van Keuren and Inhabited Silences (2010) for piano trio. Other sections are trying to capture the notion of beauty itself either through its poetic epithets such as Blue, Ephemeral, Longings in Perpetual Motion, Shadows of Memories or through evoking characteristics of its transient nature in Postlude (evanescent) or Interlude (fleeting). There is no particular narrative or story visualized in the piece. It is rather an invitation to pay attention to commonly seen and familiar phenomenon, which one could call beautiful but often wouldn’t bother to stop and take a closer look.

The visual sensibility of this project was influenced by the French impressionist Claude Monet especially his series of paintings “Water Lilies” at Musée de l’Orangerie in Paris. There on huge canvases stretching across the entire horizontal length of four walls, the world of water reflections is interchangeable with reality and the habitual perception of high-low and here-there are reversed. This visual perspective invoked by Monet led to contemplation of faded boundaries between reality and reflections of it. One night after the rain, I glanced down and suddenly noticed fragments of Notre-Dame Cathedral reflected in multiple formations of puddles. It was this flash of the underworld that allured me into further explorations of the inverted sphere of reflections. As though I saw the opening to the previously unnoticed worlds residing right under my feet, the existence of which is even more impermanent than our ordinary life.

“In Search of Lost Beauty…” was born as a contradiction to an ever more increasing speed of our lives influenced by technology. So often people look at the illuminated screens of their devices rather than the surrounding world. This “search of beauty” gently induces to slow down our usual perception and ever-fastening mind, mostly operating in the mode of automatism, by bringing it to the current Moment of Being.

Perhaps it was no accident that the idea for the project was born in Paris, during my creative residency at the Citè International des Arts in Paris. Having the luxury of time and being surrounded by the aesthetic beauty of the everyday as well as art, I had a longing to retain that perceptiveness and receptivity to beauty and somehow grasp its ephemerality.

“Composer Žibuoklė Martinaitytė writes stimulating music that bristles with energy and tension. Her orchestral and ensemble compositions are stratified, allusive, digressive and episodic. Dense and restless, they never appear cluttered. Their language is gestural, flowing and bold… The dislocations, rapid acceleration and sudden slowing and the disparate perspectives reconciled in Martinaitytė’s music embody complex structures of perception and rich textures of experience.” –The Wire magazine, May 2018 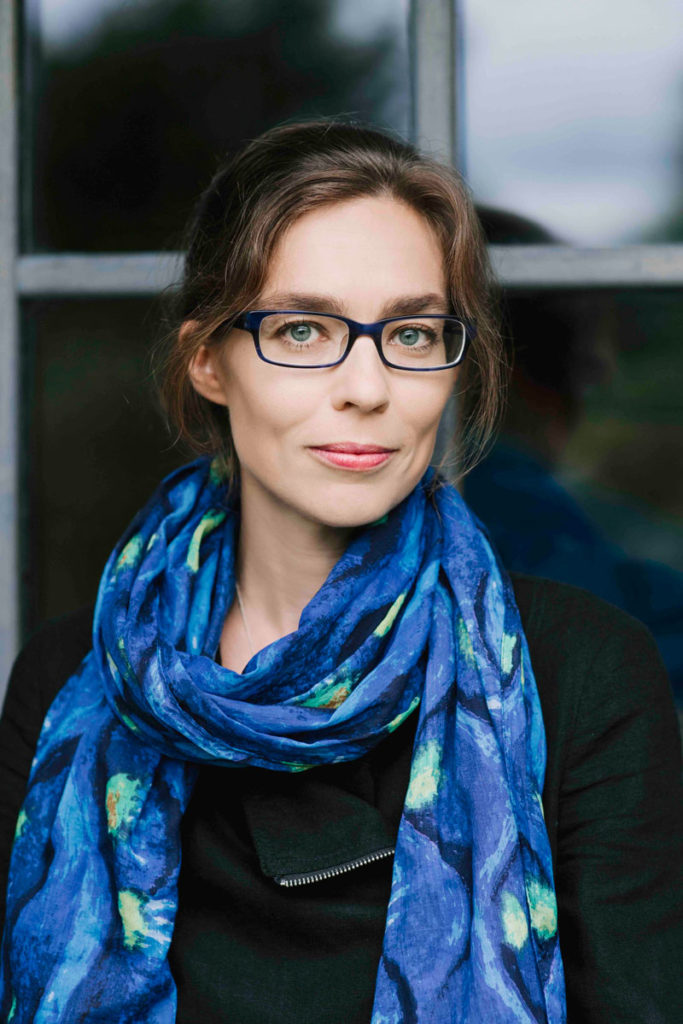 Described by WQXR as a “textural magician”, Žibuoklė Martinaitytė is a New York- based Lithuanian composer whose works explore the tensions and longings of identity and place. In her chamber and orchestral compositions, she creates sonic environments where musical gestures emerge and disappear within transparencies and densities of sound layers. It’s music that slides on the very blades of emotions.

In the last few years Žibuoklė has been an avid advocate of the concept of beauty in her compositions. Seeking to revive this essential category in terms of sonic and visual perception and as a fight against our ever-shortening attention span, she created an hour-long audiovisual project “In Search of Lost Beauty…” (2016) for piano trio, electronics and video projections. After the successful premiere in Vilnius, Lithuania reviewers noted that “In Search of Lost Beauty…” is not romantic, not narcissistic (as in Dorian Gray), not ours, a slightly glossy beauty of today. It seemed closer to the harmony worshiped by ancient Greeks, measured by balance, utter simplicity, deliberate gestures and attentiveness to detail.” This piece has been be released as a CD by Starkland Records in March 2019. Her explorations of beauty, often found in sonorous textures of ever-present harmonic overtones, continued in Chiaroscuro Trilogy (2017) for piano and chamber orchestra, Chant des Voyelles (2018) for a capella choir commissioned by VOLTI, San Francisco and Millefleur (2018) for symphony orchestra. Her orchestral and large ensemble works were released on the CD “Horizons” by the Lithuanian Music Information Center in December 2017. Covering the “Blue period”, which coincided with her move to the US and the death of her father, these pieces comprise emotional dichotomies of tension and longing resulting from the identity based on cultural ambiguities.

Martinaitytė’s work for symphony orchestra A Thousand Doors To The World was commissioned by the Lithuanian Radio to celebrate Vilnius as the Culture Capital of Europe in 2009. The premiere was broadcast by Euroradio – one of the “largest virtual concerts halls” with 4 million listeners. This piece and Horizons received the Lithuanian Composers Union Award as Best Orchestral Performance for 2009 and 2013.

Having started her creative career in Europe after graduating from the Lithuanian Music Academy, for the last decade Žibuoklė’s activity has been rooted in the USA. In 2008 the MATA festival commissioned her to write the piece “Polarities” for the Knights Chamber Orchestra. She received commissions from the Barlow Endowment (2012), “Look+Listen” festival (2017), Volti (2018), a fellowship for the Other Minds festival (2011) and the New Works residency at Harvestworks, New York (2016). Her first USA orchestral performance of Horizons took place at the Composers Inc. concert in Berkeley, California (2015). In 2017, she was granted the Copland House Sylvia Goldstein award and the Composers Now award for residency at the Pocantico Center, NY. She received several fellowships for creative residencies at the MacDowell Colony (2009, 2011, 2019), Aaron Copland house (2010, 2019), Millay Colony (2012), The Blue Mountain Center (2015), Cité Internationale des Arts in Paris, France (2015), Djerassi Artists Residency (2017) and Willapa Bay residency (2018).

Karen Bentley Pollick (violin) has performed as violinist with Paul Dresher’s Electro Acoustic Ensemble since 1999 and performs a wide range of solo repertoire and styles on violin, viola, piano and Norwegian hardangerfele. A native of Palo Alto, California, she studied with Camilla Wicks in San Francisco and with Yuval Yaron, Josef Gingold and Rostislav Dubinsky at Indiana University where she received both Bachelors and Masters of Music Degrees in Violin Performance. She has several recordings of original music, including Electric Diamond, Konzerto & Succubus, and Ariel View, for which she has received three music awards from Just Plain Folks, including Best Instrumental Album and Best Song. On her own record label Ariel Ventures she has produced Dancing Suite to Suite, , Homage to Fiddlers, Russian Soulscapes, and Peace Piece. She filmed Dan Tepfer’s Solo Blues for violin & piano in Shoal Creek, Alabama, in June 2009.

Pollick was concertmaster of the New York String Orchestra at Carnegie Hall in 1983 and 1984 and has participated in the June in Buffalo and Wellesley Composers Conferences. She has appeared as soloist with Redwood Symphony in the world premiere of Swedish composer Ole Saxe’s Dance Suite for violin and orchestra, the Alabama Symphony, and orchestras in Panama, Russia, Alaska, New York and California. She has performed in recital with Russian pianist/composer Ivan Sokolov at the American Academy of Rome, Seattle and New York City, throughout the Czech Republic with cellist Dennis Parker at the American Spring Festival, and in England at the Huddersfield Contemporary Music Festival. Along with choreographer Teri Weksler and percussionist John Scalici, Pollick received a Cultural Alliance of Greater Birmingham 2008 Interdisciplinary Grant to Individual Artists. Pollick received a grant from the Alabama State Council for the Arts and the National Endowment for the Arts for her March 2010 Solo Violin & Alternating Currents concerts in Birmingham, Seattle and at Music Olomouc 2011. She launched Violin, Viola & Video Virtuosity with New York video artist Sheri Wills in November 2012 in Brooklyn and Seattle. She has toured with the Paul Dresher Double Duo since 2009. Pollick performs on a violin made by Jean Baptiste Vuillaume in 1860 and a viola made in 1987 by William Whedbee.

Marja Mutru (piano) received her Master’s degree in piano performance from the Sibelius Academy in her native Finland. In 1995, she participated in the European premiere of John Adams’ opera I Was Looking at the Ceiling and Then I Saw the Sky, which toured extensively through Europe, and recorded the piece for Nonesuch Records with Finnish ensemble Avanti! Since settling in the San Francisco Bay Area, Marja has worked with local chamber music ensembles, such as Earplay, the San Francisco Contemporary Music Players, and the Kronos Quartet. She has also performed solo piano repertoire by local composers, including John Adams, Richard Felciano, Paul Dresher, Mark Grey, and Erling Wold, and has recorded Wold’s two chamber operas, as well as his Albrecht’s Flügel for solo piano. She joined the Paul Dresher Ensemble in 1998. In addition, Marja has worked as a vocal repertory coach at San Jose State University and the California Institute of the Arts, and most recently participated in the world premiere of Sheli Nan’s chamber opera The SAGA of the 21st Century Girl.

Monica Scott (‘cello) has performed throughout the United States, in almost every European country, Argentina, Canada and South Korea, engaging audiences with her energetic, eloquent playing. After an artist residency at the Banff Centre (Canada) in 1994, Monica performed for four seasons with the Orquestra Metropolitana de Lisboa in Portugal, with whom she also appeared as concerto soloist. Since moving to the Bay Area in 1998, Monica has been actively promoting new music, as a member of the composer/improviser collective sfSound, and performing with Composers’ Inc., the Composers Alliance, and in numerous chamber music groups; she was the cellist of the award-winning San Francisco-based Del Sol String Quartet from 2001-2005. In 2006, Monica formed the cello-piano duo martha & monica with pianist Hadley McCarroll. They perform regularly throughout the region, presenting ambitious programs of masterworks and challenging contemporary repertoire – recent projects included a year-long residency at Old First Concerts offering pre-concert moderated discussions with novelist Sylvia Brownrigg, art historian John Zarobell and composer Thomas Adès – a mini-series at Z-below that showcased 11 contemporary works, including Morton Feldman’s 100-minute Patterns in a Chromatic Field, and a 10th anniversary program at Berkeley Chamber Performances featuring a commissioned work by Omid Zoufonoun and Thomas Adès’ Lieux retrouvés. Monica is also a devoted teacher, serving on the faculty of the Crowden School (cello, chamber music and music history), coaching for the Chamber Musicians of Northern California, and maintaining a large private studio.