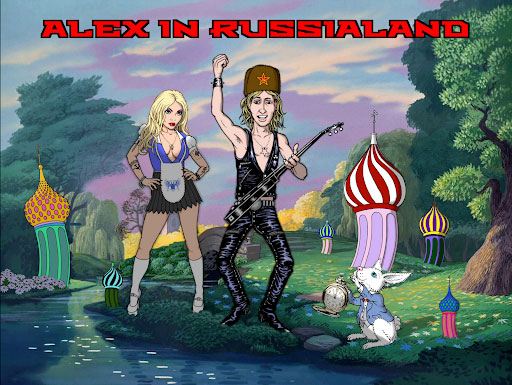 Join us for a raucous 40-minute dive into the extraordinary non-stop world of rock musician Alex Carlin – the veteran of the East Bay’s 70s rock scene playing with such unique and much-loved bands as the Rubinoos and Psycotic Pineapple. The son of the Bay Area’s celebrated actress/director Joy Carlin, Alex has spent the past decade on a non-stop club and train tour of Russia and former Soviet states, averaging over 100 concerts a year. Along the way, he chalked up a Guinness World Record for the longest solo concert ever—a 32-hour tour-de-force performance in Radomsko, Poland.

After the screening of the 40-minute award-winning film, Alex will pick up his guitar and sing a solo set and take questions from the audience. The film also answers the unasked but pressing question: what can you do with a degree in Russian Literature from UC Berkeley?

□ □ □ □ □ □ □
For 10 years Alex and his rock band have been on a nonstop tour of Russia, from Moscow to the Black Sea resort areas, amounting to over 100 concerts per year. For a finale, Alex performs at the Russian “50th Anniversary of Woodstock” Concert.

To ensure your safety, we require that everyone attending has been vaccinated + booster and will wear a N95 or KN95 mask.

About the Documentary Film

Alex Carlin is not Borat — he is a real person, and this is really his life. For seven years Alex and his rock band have been on a nonstop tour of Russia — over 100 concerts per year. From Murmansk in the Arctic Circle to the Southern Black Sea, from the Far West Kaliningrad to the Far East Kamchatka, through the vast untamed Siberian territories so ripe for rock and roll, the ALEX CARLIN BAND gets to the next gig by train, not plane. The “Russian Rock-and-Roll Railroad” is a daily adventure of music, romance, fascinating characters and unsinkable people-to-people diplomacy. In 2020, a documentary movie was completed only a moment before the pandemic hit Russia, which would have blocked some of the traveling and concerts. But as fate would have it, the die was cast, the affair was consummated, and here it is, the Russia you have never seen before: Alex in Russialand !

The great Russian film director Dziga Vertov made amazing films at the dawn of cinema in the 1920s. Nobody was acting, but his flow of shots of the vitality of real life in Russia created a fantastic movie. This is what inspired my directing approach for Alex In Russialand. My camera crew brilliantly caught the magic that swirled around us as we toured Russia. Later, after I watched and made notes from every single clip from every camera, we made the story emerge by editing.

Our editing style was heavily influenced by Vertov and other early Russian masters of that editing style which they invented and gave to the world. They called it “montazh”. I was also inspired by the filmmaking of Frederick Wiseman, who creates wonderful movies assembled and edited from his shots of real, unstaged found events.

In June 2009, in Radomsko, Poland, Alex Carlin broke the Guinness Record for “Longest Solo Concert” : 32 hours of nonstop rock, including all the Beatles songs played by memory. Over 500 songs total.