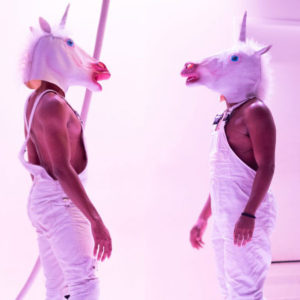 __temporary boy; friends__ is a new multidisciplinary collaboration that explores the poetics of rhythm and the process of cultivating revolutionary relationships that evolve and extend beyond the studio and into quotidian life. Working with themes of sonic and physical dislocation, this work asks us to interrogate the ways in which both body and sound-based practices are used as tools for ancestral reverence, resistance, and cross-cultural connections for us as individuals from various diasporic lineages. We will work with text, choreography, and ethnographic praxis as well as multi-channel sound installation to create a landscape that asks all of our ancestors into the room to sit with the ways in which they might intertwine with, envelop, and recontextualize our relationships to one another as people of color in solidarity against oppressive institutional and political structures.

jose e abad is a queer social practice performance artist exploring queer futurity through an intersectional lens, dancing and creating work in the Bay Area since 2015. abad’s artistic practice is rooted in collaboration and community-engaged arts as a form of resistance and liberation. Through dance and storytelling their work unearths lost histories, memories, and wisdom that are held within the body that the mind has forgotten or dominant culture has erased. They examine the relationships between the self and our physical, social, and spiritual environments in order to rip apart the constricting narratives imposed by external forces and create space for the complex and nuanced existence of queer, black, and trans* people of color. abad is a collaborator in two queer performance collectives, Yum Yum Club and Lxs Des, and has performed solo and collaborative works nationally and internationally with artists including Joanna Haigood, Keith Hennessy, Scott Wells, Anne Bluethenthal & Dancers, NAKA Dance Theatre, Seth Eisen, Ivo Dimchev, Brontez Purnell Dance Company, and detour dance.

Gabriel Christian is a multidisciplinary BlaQ artist. After receiving a BA in Theatre Studies from Yale University in 2013, they shifted coasts and work from their native New York to the Bay Area. Their work metabolizes the vernaculars within BlaQ diaspora—futurity, afrovivalism, faggotry—through body-based live performance and poetics. They have mounted commissioned work at Finnish Brotherhood Hall, Counterpulse, SOMArts, Mason Chapel for San Francisco International Arts Festival, and Red Poppy Art House for FRESH Festival.

Gabriel Nunez de Arco is a Bolivian Latinx multidisciplinary sound artist currently living on Chochenyo land in Oakland, California. Their work as a composer is informed by 10 years of DJing and event organization in primarily squatted, reclaimed or liberated spaces, performing in queer collectives. Their work is primarily concerned with the use of dance music infrastructure to create networks of community support within the margins, challenging dominant cultural narratives from outside the frameworks of the cultural institutions and the music industry. Their music utilizes analog synthesis, field-recording, and spatial audio techniques in a compositional methodology that connects personal shadow-work with the healing of inter-generational trauma to reach towards liberatory and perpetually generative ontological structures. 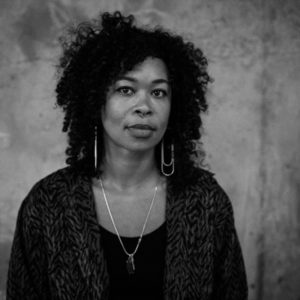 A(void) on Fire is a live-scored and projection-mapped horror film about a woman who is haunted by a demonic embodiment of her Comfort Zone. She must escape the routine emptiness of her life in order to exorcise her self harming “Familiar.”

Alexa Burrell creates collages composed of narrative film, animation, and soundscapes that center the black femme experience. She is best known for her site-specific video and sound installations in House/Full of Blackwomen, an Oakland based art collective addressing the displacement and trafficking of Black women and girls. As a trained musician, her visual work is always informed by the logic of melodic gesture and rhythm to produce hypnotic afro surrealist psycho-somatic experiences. She often compares the micro and macro, the scientific and spiritual, and the historical and mythical, to evoke the complexities of coloniality, gender, time travel and black feminist thought. Alexa received her BFA from The University of California Santa Cruz, in 2010. She won the 2018 Soundwave Festival’s “Buzz Award” for innovation in music. www.alexachristineburrell.com 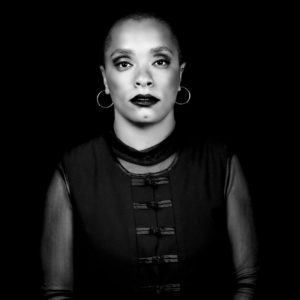 mouth//full uses multidisciplinary performance to examine a key tool for resistance, resilience, and revolution for Black/African descended people in the bleakness of this past/present moment: faith, a steadfast sense of belief which helped us persevere, create new worlds and stay alive. This work taps into the innovative energy of Afro-diasporic/American culture(s), which adapt church as stage; ritual as script; faith as performance, meeting our needs and generating community despite racist, capitalist conditionings of colonialism. How do we access this ancestral survival source to build true non-denominational communion?

Chibueze Crouch is an Igbo Nigerian-American performance / teaching artist born on Paugussett land (Danbury, Connecticut) currently living on Chochenyo Ohlone land (Oakland, CA). Her creative practice straddles theater and ritual, examining Diasporic longing and constructions of identity through masquerade, song, poetry, and live performance. Her work is a slow trickle of blood sliding down your forearm, the sweetest juice of an overripe fruit: you almost don’t notice until it stains your good shirt; then you can never forget where it came from. Trained primarily in theater and a cappella music, Chibueze’s artistic practice merges song, original writing, and uninhibited movement to create solo and collaborative devised work. Performing ritual grounded in her personal chi and biracial ancestral inheritances is a key aspect of her spiritual and creative methods. After a postgraduate fellowship working at Trinidad Theatre Workshop in Trinidad & Tobago from 2014-2015, where she encountered numerous Diasporic reminiscences of her Nigerian heritage, Chibueze began exploring West African masquerade, particularly those indigenous to Igboland. Her creation of masquerade figures invoke queer, Afrofuturist, and decolonial feminist/womanist themes that both honor ancestral traditions and innovate new ones for an ever-changing contemporary Diaspora. https://www.instagram.com/carefreeblackauntie/ 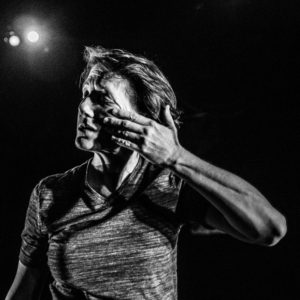 EPOCH subverts conventional performance models by defying Doris Humphrey’s warning “All dances are too long.” EPOCH unfolds over 12 hours, with 20 performers spanning four generations, in a gratuitous surplus of movement, interrupted by moments of nothingness, to challenge the valuing of acquisition. EPOCH argues instead for sustenance through eternal return, in homage to the maintenance art of Mierle Laderman Ukeles. EPOCH features an all-women led artist team, including Funsch, composer Cheryl Leonard, and lighting designer Danielle Ferguson (there is a 30-year age range among us). Composer Cheryl Leonard is building an installation of found-object musical instruments (imagine a metallic mobile) that is dismantled over the duration of the performance. Leonard’s instruments-initially motorcycle sprockets, circular saw blades, and coins-are methodically replaced with natural materials including driftwood, eucalyptus bark, and stones. This transformation advocates turning to nature for models of healing and sustainability.

Since forming Funsch Dance in 2002, Christy Funsch has had her work presented in Amsterdam, Chicago, London, Nebraska, New York, Phoenix, Portland, Toronto, Virginia, and throughout California. She has self-produced thirteen full-length evenings of new work. Her choreographic trajectory has evolved over time from emotionally-driven narrative pieces (Daisy, 2002), to genre-blending theatrical works (Boy Blue, 2004; To Mifune, 2007), to somatic improvisation (Box Elder, 2009), to an emergent premise process wherein questions drive the creative process (This is the Girl, 2014; Dissolver, 2015). Funsch: “I founded Funsch Dance Experience in 2002 to question representation, narrative, and conventional depictions of women through deeply investigated, specific movement vocabularies. A central tenet of my work is a performance of intimacy between women, and a dismantling of overused habits such as narrative arcs, large men lifting small women, and work that culminates in group unison. I believe in non-commercial and challenging works of art that empower viewers to think and bring their own insights to the experience.” www.funschdance.org 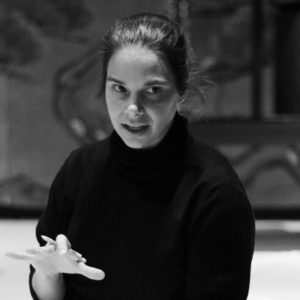 THIS TIME ONLY, ONCE AGAIN (IN THREE PARTS) is an epic series of three new performance artworks for female voices tuned to the inherited injustice of womanhood. It is a personal, experimental ritual drawn from the life¬ stories of three women from successive generations. These lives are merged with conventions of the Japanese nohgaku and the Way of the Cross Chronicle to create a durational event, with the final form lasting over 12 hours of continuous performance. THIS TIME ONLY is a ceremonial, communal experience aimed at the transformation of the audience, the performers, and the space.

Jubilith Moore is a theatre artist and accomplished nohgaku practitioner, with more than 25 years of authentic training in the Japanese noh and kyogen forms, both in Japan and the US. Moore is known for a passionate devotion to the traditional forms that doesn’t preclude the ability to innovate, intelligently re-imagining tradition as something new. She has studied noh with the esteemed American noh expert Richard Emmert as well as the Kita School of noh shite-kata, and holder of Japan’s cultural honorific Important Intangible Cultural Property, Akira Matsui. Since 2009 she has been a student of Kinue Oshima, the first and only female shite-kata recognized in the Kita School. Moore studied kyogen with Yuriko Doi and Yukio Ishida of the Izumi School of kyogen, who is also a holder of Important Intangible Cultural Property. https://www.marzipanik.com/stationsproject 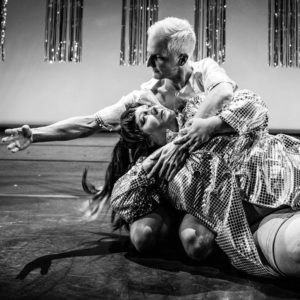 “Urge and urge and urge” will be an original dance and music collaboration performance centered on queer friendships. Friendships among queer folx tend to blur and bend boundaries and roles in a way separate from nonqueer relationships and romances of all kinds. Queer friendships can be romantic, sexual, and tender without predetermined results in mind. They are also foggy, difficult, and highly vulnerable because they exist largely in conflict to normative boundaries of casual friendship. This project will be a collaborative process between dancers and musicians to create a work reflective of queer friendships in both process and product. How can we create together blurring boundaries and preconceived roles while remaining true to our craft?

Heather Stockton and Garth Grimball created Wax Poet(s) in 2013 as a vehicle to create their own work, as a laboratory to collaborate with artists across mediums, and to challenge the ingrained dynamics of creative relationships by keeping their practice amorphous. Our work is a reflection of who we are — skinny, fat, tall, short, queer, insecure, brazen, thirsty pop culture nerds, history buffs. Our work represents our desires — intimacy, validation, challenge, community, sweat, awareness, subtleties that enlarge the micro and reduce the macro. www.wax-poets.com

The 2022 Dresher Ensemble Artist Residence application period has commenced as of Fall 2021.

Residencies will be announced to artists before December 31, 2021